The Difference Between DSSC(Direct Short Service Commission)And SSC(Short Service Combatant Commission) is one of the questions those who want to join the Nigerian Army As A Graduate Normally ask. In this Post, we are going to explain the difference in detail.

Direct Short Service C0mmission DSSC and Short Service Combatant commission SSC are both Short Period Training for Officers of the Military,
Normally not more than 1 Year of Training.
Direct Short Service Commission (DSSC) is Mainly for those Who came out of higher Institution with a career that they will like to further in The military Like Medicine, Engineer, Finance, Education, and some other related course.
while Short service combatant commission (SSC) is for those who wish to be combatant. They are trained for action in the field just like (RC) Regular Cadets. The Regular Cadets Are Those who joined the Nigerian Defence Academy with SSCE and spend a minimum of 5 years doing both Academic and Military Training. They are also known as regular officers. 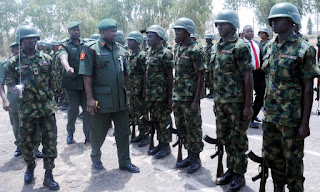 They are always deployed to the Combat Corps Department in the Nigerian Army Such as Infantry, Artillery and others.
So As SSC you have to always compete with the Regular Combatant Course.

Remember those men spend 5 Years in Their own training to become Officers.
Those in the SSC are Likely to be promoted faster more than the DSSC because they are young and fully needed in the service,

But those In The DSSC are already Old, and are not fully needed in the service.
Though to apply for both you still have to be a university graduate.
In Other words, If you wish to be in the field as a combatant, it’s better to apply for SSC.
Another difference is Age.
Age Plays another roll in this two Different Courses, Those for SSC are Younger than The DSSC,
Age is always Stated While Applying for both. If you check, You will see that there is A difference between the Age Limits for Both.

Note that there are still some Rank that DSSC and SSC can’t reach as an Officer except converted to Regular.

How To Join The Nigerian Army In 2021(SSCE/Graduates)