Nigerian Defence Academy (NDA) 71st regular course admission online application form is available for sale as from Monday 22 October 2018 to Thursday 14 March 2019 and it is open to both male and female Nigerians. The NDA screening test will be conducted as phase one of the Post-UTME screening and is scheduled to hold on Saturday 13 April 2019 at designated centres across the country. Only candidates with JAMB 2019 Registration Number will be eligible to write the exams. NDA will await JAMB 2018 examination results before shortlisting candidates for the 71 RC Armed Forces Selection Board (AFSB) interview. Only candidates who score a minimum of 180 (for Faculties of Arts and Social Sciences, Science and Military Science & Interdisciplinary Studies) and 210 (for Faculty of Engineering) in JAMB 2019 examination shall be offered admission into NDA by the AFSB. 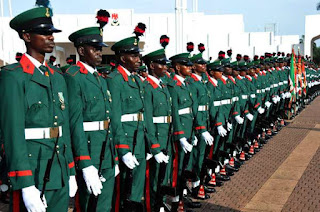 The requirements for various undergraduate degree programmes are as detailed in the NDA website / applications portal, as well as in the JAMB Brochure and website. All other information concerning degree courses, eligibility and examination centres are as contained in the NDA website / applications portal. Please note that working knowledge of French, Arabic and Mandarin will be an added advantage to applicants. WAEC/NECO or NABTEB results of 2019 will not be accepted. 1. To be eligible for admission into the Nigerian Defence Academy, a candidate must have the following: Passed the Unified Tertiary Matriculation Examinations (UTME) and attained an acceptable minimum national standard (as determined by JAMB annual policy meeting) in English language, Mathematics and any other two subjects relevant to the proposed course of study as set out by the JAMB brochure. The course applied for on JAMB and NDA portal must be the same. The choice of UTME subjects combination must be relevant to the course applied for in NDA. Minimum of Five O level credits at GCE, SSCE (WAEC,NECO and NABTEB) in English language, Mathematics and three other subjects which are relevant to the intended programme at not more than two sittings. Candidate be up to 17 years but not less than 21 years by 1 August 2019. Note:(1) Candidates who desire to join the Nigerian Air Force must be between 17 and 19 years old at entry. (2) The Nigerian Air Force has suspended the enlistment of female candidates in her Regular Combatant programme in NDA. Must not be less than 1.68 meters tall for maleand 1.65meters for female. Must be medically and physically fit and must be of good moral character. Must have a BMI of between 18.5 – 25.5 kg/m2 to be considered for selection. Must be single male or female without legal obligation to support any child or other individuals. Present a Certificate of indigeneship from the State Government or Local Government Area. Working knowledge of French, Arabic or Mandarin language is an added advantage. 2. Furthermore, candidates are to note the following: Candidates awaiting results are not qualified. Application forms submitted without results will not be accepted. Only examination results of not more than 5 years old from the date of examination will be accepted. Currently, admission into the Academy is for both male and female Nigerians only, but Nigerian Air force does not accept female candidates for now

APPLICANTS APPLYING FOR ADMISSION INTO NDA MUST ALSO APPLY TO THE JOINT ADMISSIONS AND MATRICULATIONS BOARD (JAMB), AND MUST SELECT NDA AS FIRST CHOICE INSTITUTION. THE COURSE APPLUED FOR ON JAMB AND NDA PORTAL MUST BE THE SAME. SUCH APPLICANTS ARE EXPECTED TO SIT FOR THE JAMB UNIFIED TERTIARY MATRICULATION EXAMINATIONS (UTME).

List Of Courses Offered In The Nigerian Police Academy

Career and Employment Education Jobs OTHERS